Many pesticides in EU may damage human brain: study

click here
Posted by Rashid Faridi at 10:03 AM No comments: 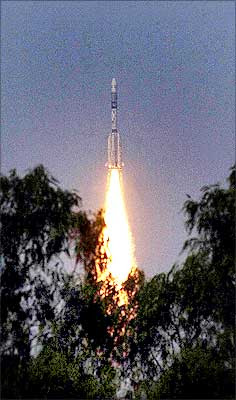 Chandrayaan-1, India’s maiden moon spacecraft, was put into Transfer Orbit around the earth by the Polar Launch Vehicle PSLV-C11 after it blasted off from the Satish Dhawan Space Centre.

The 1,380 kg Chandrayaan-1, carrying 11 payloads, was released into a Transfer Orbit 18.2 minutes after the PSLV-C11 blasted off.

After a series of procedures over the next two weeks, the spacecraft would reach its desired Lunar orbit and placed at a height of 100 km from the Lunar surface, marking the operational phase of the mission which would put India in the elite lunar club.

Earlier, at the end of the 49-hour countdown, the 44.4 meter tall four-stage PSLV-11 lifted off from the second launch pad into a cloudy sky......
read full post

Posted by Rashid Faridi at 4:16 PM No comments:

Ban on commercial use of GPS in Egypt

Technology lovers and modern car owners in Egypt consider themselves unlucky because of a government ban on the usage of Global Positioning System (GPS) technology.

Telecoms Law 10/2003 outlaws the import of GPS-equipped mobile phones, and retailers found selling them could lead to the confiscation of their entire stock. The same applies to any kind of commercial use of GPS technology, which includes cars equipped with GPS devices.

Mobile phones like the Nokia N95, N82 as well as iPhones and some 3G phones are banned in Egypt, leaving the market deprived of the latest technology and features that are fast becoming standard in the new generation of mobile phones.

GPS helps users navigate to their destination inside cities and in remote areas. It also functions as a guide for places of interest as well as hospitals, police departments and businesses.
source

Posted by Rashid Faridi at 7:37 PM No comments:

Chandrayan-II:India Planning to Land a Rover on the Moon

Posted by Rashid Faridi at 5:52 PM No comments:

Wealth map of the world

When you look at the map of the world, what do you see? Probably a cosy agglomeration of nations that is imprinted on your brain – reinforced time and time again from its pride of place on everything from classroom wall to newspaper graphic to in-flight magazines.

This projection of the Earth – a great mass of Russia across the top, a slightly oversized UK on the edge of Europe, impenetrable China and Mongolia on the right, the expanse of America on the left, with Africa centre-bottom – is an image as strong as the Union Jack, the London Underground logo or the Olympic rings. Except it represents only a basic truth about the world, one that has been with us in essentially the same form since the Flemish cartographer Gerardus Mercator created his Mercator projection in 1569.

Now, though, three academics – a professor and research assistant from Sheffield and another professor from the University of Michigan – have produced The Atlas of the Real World, a book that at first glance looks like a whole bunch of world maps on acid.

Except, you could argue, that these warped representations come closer to the truth about our planet than the originals on which they’re based.

Daniel Dorling, professor of human geography at the University of Sheffield, Mark Newman, assistant professor of physics and complex systems at the University of Michigan, and Anna Barford, research associate at Sheffield, have created the website www.worldmapper.org, on which the book is based, which bends and twists our continents according to statistics such as the number of elderly, international immigrants, grocery imports and even ¬demonstrations against the war in Iraq.

“Because we’re confident people, we think we know what we’re seeing; you see a map and you think you understand it,” says Professor Dorling, 40. “But if you take a normal map of Britain and colour it by how popular the Labour Party is in each area, you wouldn’t be able to tell whether it was going to win the next election. Although you might know Britain very well, you don’t know it well enough to know the areas with high population density.”

It was to overcome these problems that Dorling and his colleagues set about creating cartograms that offer up an image of a new world order in which the distribution of the planet’s rich and poor, drinking water, weapons and trade can be seen at a glance.

He and the www.worldmapper.org team who published The Atlas of the Real World identified regions – but not exact continents – from Western Europe to Japan to South Asia to northern Africa and colour-coded them, with the nations within them given different shades of that colour. Then, using statistics, principally from the United Nations but also other bodies including the World Bank, the CIA and the World Health Organisation, they manipulated the images so that regions expanded and contracted in relation to each other.

So when figures on net immigration, for example, are inputted to the worldmapper model, the USA and the UK become huge and bloated, while Africa and China almost disappear. Conversely, on a map of absolute poverty, Europe is all but invisible while Asia expands massively.

The book contains 366 cartograms – the last one, almost charmingly, illustrating invertebrates at risk – that not only show us what we’d expect in the divisions in wealth, but also ignite surprising flares of unexpected social phenomena.

So the map depicting decline in wealth, for example, showing the decline in GDP from 1975 to 2002 adjusted for local purchasing power, has the US, Western Europe and Japan all but invisible, but a hugely inflated Eastern Europe.

While we might think that the end of Communism brought about huge increases in some ex-Soviet satellite nations, countries such as the Ukraine, Slovenia, the Czech Republic and Poland actually lead the way in the largest declines in wealth. (China, surprisingly, hasn’t been affected in the same way.)

These images then allow us to draw what might otherwise be hidden conclusions about the world in which we live. A refugee map, for example, won’t, as you’d expect, display a greatly enlarged West. “Most refugees go over national rather than international borders,” explains Dorling. “The implication is that the burden on Africans to look after refugees is as great as it is for us.” An obvious contemporary example would be Zimbabweans in South Africa. The maps have applications in advocacy, too. A map showing how many votes nations get in the International Monetary Fund was used by African countries who wanted greater representation.

Interestingly, when you zoom in on an area, it reverts to how it would look on a regular map, with its normal place on lines of latitude and longitude.

It is only as you pull out that those lines distort and the reader is given this vision of the world.

“Although land mass is important, people are probably more important than area,” says Dorling. “In a map by population, a sixth of the world would be Chinese. You could have a world atlas where the Sahara just wouldn’t appear.”

Posted by Rashid Faridi at 10:38 PM No comments:

LHC Computing Grid Can Teach the Internet a thing or two

Before the year is out, the LHC is projected to begin pumping out a tsunami of raw data equivalent to one DVD (five gigabytes) every five seconds. Its annual output of 15 petabytes (15 million gigabytes) will soon dwarf that of any other scientific experiment in history.

The challenge is making that data accessible to a scientist anywhere in the world at the execution of a few commands on her laptop. The solution is a global computer network called the LHC Computing Grid, and with any luck, it may be giving us a glimpse of the Internet of the future.

Once the LHC reaches full capacity sometime next year, it will be churning out snapshots of particle collisions by the hundreds every second, captured in four subterranean detectors standing from one and a half to eight stories tall.* It is the grid's job to find the extremely rare events—a bit of missing energy here, a pattern of particles there—that could solve lingering mysteries such as the origin of mass or the nature of dark matter.

A generation earlier, research fellow Tim Berners-Lee of the European Organization for Nuclear Research (CERN) set out to create a global "pool of information" to meet a similar challenge. Then, as now, hundreds of collaborators across the planet were all trying to stay on top of rapidly evolving data from CERN experiments. Berners-Lee's solution became the World Wide Web.

But the fire hose of data that is the LHC requires special treatment. "If I look at the LHC and what it's doing for the future," said David Bader, executive director of high performance computing at the Georgia Institute of Technology, "the one thing that the Web hasn't been able to do is manage a phenomenal wealth of data."
source
CERN unveils computer grid linking 7,000 scientists
Posted by Rashid Faridi at 12:17 AM No comments:

Email ThisBlogThis!Share to TwitterShare to FacebookShare to Pinterest
Labels: news

click here
Posted by Rashid Faridi at 6:16 PM No comments:

click here
Posted by Rashid Faridi at 6:14 PM No comments:

readers on this site